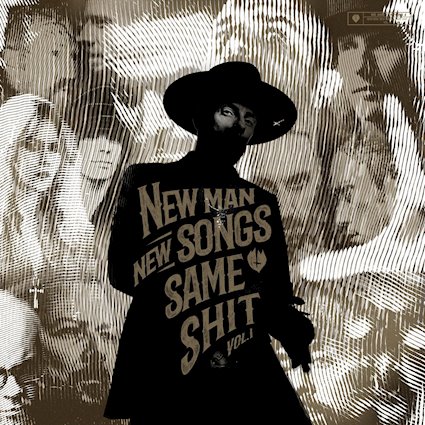 I’m a huge fan of Nergal. His, and his bandmate’s, work on the latest two BEHEMOTH releases has been stellar; breathtaking at times. The grandiosity, the dramatic flair, the whole encompassing *passion* that bleeds from the hollow cavity in his chest over the work he creates . . . It is a genuine audiological signature that you can feel. Nergal isn’t alone in this category of authentic songwriters possessed by a driven consummation, but he is certainly one of the most visible. He puts himself inside the public eye and he refuses to be back away from it.

I dig it. And I find his passion inspiring. So, yes. I’m a huge fan of Nergal. And when I got the opportunity to review his newest work with ME AND THAT MAN for SUPER METAL WORLD, I was touched for the opportunity and gladly took it. Further truth be told, I was greatly looking forward to this release as it was.

Another one of my biggest fan-hoods is spaghetti westerns and outlaw country. Those are probably ‘dirty’ terms, but you get the point. I’m not sure what the proper vernacular is, we can call it southern gothic or blues rock if you like, but you get the point. We’re dressing in black, smoking cigars, and living in the filthier places. All three of those things are great passions of mine; and regardless the monikers you place on it, I adored the first album, SONGS OF LOVE AND DEATH. And just after its release, when I heard about the immediate lineup change, I was a bit letdown.

I figured it spelled the bitter end to something that had just begun. Which was a huge bummer for me, because I have screamed this from the rooftops for a great while. Outlaw country and metal music are very close cousins in terms of attitude, ambiance; matters of soul, spirit, and head space. The rebelliousness, the harder living, and the sharper edges. And having a personal hero of mine like Nergal take up an outlaw country side project seemed so inspired, and truthfully, it made so much sense.

So, yeah. I was upset with the lineup change. But the turnaround was pretty quick, and here we are a few short years later with a brand new album, and I couldn’t be more ecstatic. I’ve listened to this new album and . . . Imma tell you about it. I’ve made you wait long enough.

First thing that stands out, and its presence is immediate. This album is much more up-tempo than its predecessor. SONGS OF LOVE AND DEATH was much more contemplative and brooding. It emphasized slower, dirge-like passages of whole-aching gothic emptiness. It wasn’t all painful songs of woe and soul. There were more upbeat moments and songs, but in a very general way, SONGS OF LOVE AND DEATH focused more on the total weight of darkness and existential emotional ache.

NEW MAN, NEW SONGS, SAME SHIT, VOL.1, by comparison, has much more movement and energy. I won’t say it’s lighter, but I will say it’s a little brighter. An easy place to see the difference is the guitar work, and I want to throw a special emphasis on the guitar solos. The case in point on this is the ending of “By The River.” It’s not the only track with a virtuosic electric guitar solo, but to me, it was definitely a stand out. The guitar work in the last sixty seconds, in tune with the rising chords and energetic percussion, is something you would have never heard on the first release. And to be blunt . . . It’s fucking awesome. Very, very stellar work and something to really be proud of.

I haven’t heard such a fusion of electric audacity mixed with outlaw folk sound this flawless. Normally, those two worlds don’t play well together, the total electric virtuoso on the fender strat and the up/down acoustic guy in a ten gallon hat. But the new ME AND THAT MAN not only create something entirely unique, they do it as if they’ve been doing it their entire lives. It sounds so incredibly natural, as if it’s a genre with millions of players and practitioners. They play so smoothly in and out of their tracks as if they aren’t entirely unique. Like it’s the most normal thing in the world. And that kind of gravitas is what makes every man in black more than just someone who donned a dark coat and some new boots.

Another personal favorite of mine was “Surrender,” which immediately shares space with Elvis Presley’s “Fever.” The stripped down subtlety and percussive sway. It’s a very seductive track that proves, just like Elvis did, that sexiness can be found in the least of volumes.

Everyone has heard the infectious “Run With The Devil” by now, so I won’t spend much time on it, but it is important to note that it is a very effective album opener. Because if you like that track, pretty safe bet you will dig the rest of what the album has to offer. The compositions do a fantastic job of staying thematic and sticking with a signature sound. That’s also an added element to the overall composition of the album compared to SONGS OF LOVE AND DEATH. Although a very pervasive and brooding darkness carried the entirety of the work, the first album differed slightly on tonality and emotion depending on the track.

This offering, by contrast, has a very central core sound that stays constant and remains centered for the most part. The songs are a bit more electric, they have a bit more bite and they put a little more move in your groove. Even in the small little flexes for breath that the songs may have, there is still a polished movement to it. The rolling stop/start magical banjo in “Deep Down South” delivers this feeling to perfect showcase, giving rise to our spaghetti western prowess with not just that banjo but also backing trumpets and some beautiful little harmonica on the album closer “Confession.”

And as the closer, “Confession” feels incredibly accurate and on point. A song for setting suns and stampeding angry black horses. Complete with . . . And I LOVE that I’m saying this . . . a blast beat over the tolling chords that ring out and lower themselves below the horizon to the stampeding snare; as if the drum had been the heavy hooves of the devil trampling the song, the man, and the album into a cold and waiting grave to be judged only by God himself.

If ME AND THAT MAN’s SONGS OF LOVE AND DEATH was FOR A FEW DOLLARS MORE, then its successor is ONCE UPON A TIME IN THE WEST. It’s bigger and smoother with a few more smiles. It does feel like more of a direct and *complete work* rather than a collection of songs that explore similar moods. It still has the same grit, but it’s expressed in raw attitude and sexiness rather than brooding gothic suffering. There are a couple places where the southern gothic and western elements border on campiness, but they never entirely cross over.

One of the few things missing from the record is swaying age and pained ballads like “Cross My Heart And Hope To Die” and “Ain’t Much Lovin’ Anymore,” which, personally, are some of my favorite tracks to this day. From any band. Buuuut . . . This album does have ballsy guitar solos throughout and a driving blast beat in its conclusion. So perhaps it really isn’t missing anything at all, just offering different shades of the gallant and blackened sprawl that is the southern gothic gunslinger swaying on in the distance and darkness.

All weighed and measured, this thing is fun. Hypnotizing in places, and a testament to the power of music. It can bring together any two worlds that seem so different like Nergal has done here. And you can learn that when faced down with the Devil of the thing, that these worlds aren’t so different at all

. . . And we’re all rebelling against the same type of shit.

ME AND THAT MAN

P.S.—Also interesting and worthy of note is Nergal’s reduced vocal presence throughout the record. He only sings on a few tracks, which was a little bit of a bummer for me. But, I admit, I am a rather large fan of his. Other listeners more than likely won’t be so picky, especially with all-star guest vocalists like Matt Heafy and Corey Taylor making appearance.

AVAILABLE NOVELS
THE BIG RED DEVIL, GRAVEWALKER, LAVENDER BLUE, ROAD OF BONES
Find all my books on Amazon in Kindle and paperback. There are a lot of John Hubers, but I’m the only one with a two foot red beard that writes horror novels. I think you’ll know me when you see me.

MUSIC (SKELETON ROSE)
NECRO, KINGDOM, BLACK ROSE, DANCE WITH ME AT THE END OF ALL THINGS (LIVE ALBUM), HAUNT ME (EP/LIVE ALBUM)
Find all my music anywhere you purchase or stream your digital music. Including iTunes, Google MP3, Amazon Music, Spotify, etc.

Check out all my work with SHOTGUN FACELIFT on Facebook.